What Does Santa Claus Charge for Water and Wastewater Service? 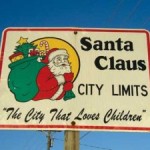 The call came in on a December morning several years ago. When I saw the caller ID said “Santa Claus” I decided not to answer the phone. My thought was “seriously, what will these telemarketers think of next?!?”

Later that morning, I noticed that caller had left a voicemail. To my surprise, there was a message about water and wastewater service rates from the Mayor of Santa Claus, Georgia!

Santa Claus’ Mayor had called to request a hard copy of the Georgia water and wastewater rates survey results. This annual survey is funded by the Georgia Environmental Finance Authority (GEFA). The Mayor had received a card in the mail announcing that the results had been released.

I was about to offer to talk him through how to navigate to the results online, but I had to quickly come up with an alternative after he mentioned that getting access to a computer would be a little difficult. This is when it finally clicked for me that Santa Claus is a very small town. Estimates are that the population is about 200.

Small water/wastewater systems like this one in Toombs County face many unique challenges as they try to deliver critical service. Small water systems comprise more than 94 percent of the nation’s 157,000 public water systems and face different obstacles than their larger counterparts, including geographic isolation, small staff size, growing infrastructure needs and small customer bases. Fortunately, the Environmental Finance Center at UNC Chapel Hill is leading a team including the Environmental Finance Center Network and the American Water Works Association in a project aimed at building the financial and managerial capabilities of those who manage small water systems. Through a cooperative agreement with the EPA, small systems in all 50 states and all U.S. territories will have access to free training and technical assistance.

In order to assist Santa Claus, I volunteered to print a subset of the rates tables that detail the rates each utility in Georgia charges for the counties that surrounded Santa Claus. I printed a copy of our summary report and the results for the fifteen utilities that the Mayor identified as close neighbors. I also printed the Dashboard results for Santa Claus, comparing them to all the utilities in the state, utilities with similar numbers of accounts, and utilities within fifty (50) miles. The City received the whole package in the mail a couple of days after our phone conversation.

The Mayor requested this information because he was interested in the City’s wastewater charges. For wastewater service, Santa Claus was charging a flat rate of $8 per month to its residential customers. As a point of reference, at the time, the median monthly wastewater bill in Georgia for customers disposing of 5,000 gallons of wastewater was $26.54. The City was interested in moving away from a flat rate and wanted to see what some of their neighboring utilities were charging for sewer service. Fast forward a few years, and more recent information indicates that the City has gotten rid of the flat fee for wastewater service. Now, instead of a flat $8 per month for wastewater service, there is a $25 base fee that includes 3,000 gallons of wastewater disposal. On the water side, the base charge has increased by $2. So it seems that this small utility has made major strides to increase revenues.

As hard as these decisions are to make (for both large and small systems), there is ample evidence that rate increases are needed to keep pace with rising costs and to tackle the backlog of projects so many utilities have. The rate increases in Santa Claus, while significant, have not resulted in exorbitant charges. While ideally each utility should set their rates based on their own costs and needs, there is no denying that having accurate information about utility peers are doing can help small town leaders make hard decisions. We don’t know for sure what role our dashboard had in the evolution of rates in Santa Claus, but we would like to think that it played a small part in the town taking steps to become more financially secure.

With that idea in mind, water and wastewater utilities in Georgia should expect a present in the next couple of weeks as we release the online results and dashboard for 2014. Those of you in other states are in luck too – we currently offer Water and Wastewater Rates Dashboards for 9 states and plan to create several more in the coming year.

The post originally appeared on the Environmental Finance Blog at www.efc.web.unc.edu.

Water and Sewer Rates and Rate Structures in Georgia September 2012