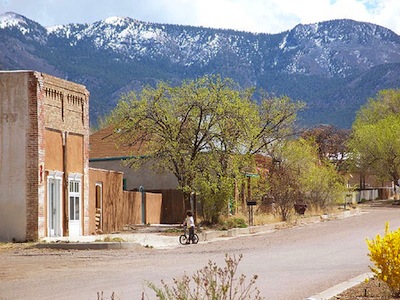 What can a small town do when the financial health of its water system is at risk? This is the question that Stephanie Finch, the town clerk and treasurer for the Village of Magdalena in New Mexico, faced in early 2015.

Magdalena has a population of 1,200 and its water system serves fewer than 450 water accounts. Located on Historic U.S. Route 60, it is known for its numerous galleries, stores, and hiking trails, as well as South Baldy Peak, which reaches 10,783 feet in elevation. The Village is rich with history of the Old West, including main-street shoot-outs and cattle drives.

In recent years, water revenues had not been sufficient to cover the operations and maintenance expenses of the water system, and the Village was not generating funds for capital projects from water revenues.   The Village was considering applying for a loan to finance an upcoming capital project, which would add debt service payments to their expenses. Additionally, Finch was concerned that one of the Village’s largest non-residential customers might disconnect from the water system, resulting in potentially significant revenue losses in the upcoming year. Finch recognized that water rates must be raised but was unsure how high the rates must be in order to cover the budget deficit, potential loss of a large customer, and finance capital projects.

“One of the challenges for the Village of Magdalena is that they have one customer that uses a large amount of water and generates large revenues for the utility,” says Eskaf. “There was concern that that customer would stop purchasing water from the utility, exasperating their financial constraints. This is not a concern that might affect a lot of other water systems, but small water systems, in particular, are vulnerable to significant revenue declines if large customers disconnect.” Eskaf helped the Village plan for a scenario in which the customer disconnected while assessing proposed new water rates to cover water system expenses and raising funds for capital projects.

“Shadi just asked me if I could send him information on our revenues, expenses for the past few years, and gallons of water that we pumped and that we sold. I just got him all this information that he was requesting and he did everything,” says Finch.

Eskaf used the EFC’s Water and Wastewater Rates Analysis Model to project whether the current water rates or proposed rates would generate enough revenues to meet projected operations and maintenance expenses and to begin setting aside funds for capital projects. The tool helps to assess scenarios of water and wastewater rate changes for the next year (or five years) by projecting the utility’s expenses, revenues from rates, and fund balance for the next few years. Using the data from the tool, Eskaf showed that the current and proposed rates would fall short of the revenue requirements next year. After consultation with Finch and NMED, Eskaf tested alternative proposed new water rates. Ultimately, a set of new water rates were tested in the model to allow the Village to break even next year and generate sufficient funds for capital expenses.

During this process, Eskaf also discovered that the Village was undercharging some customers, resulting in unintentional revenue losses. The Village promptly corrected their billings.

Finch hosted public meetings with the Village’s elected officials and concerned citizens to propose raising the water rates. Eskaf worked with Finch to help her understand the information provided by the Water and Wastewater Rates Analysis Model so that she could clearly convey the reasons behind and benefits of higher rates to the public during these meetings.  These benefits included covering previous losses, setting aside money for capital improvements, and becoming more financially stable.

“What was great was that he was available on the phone [during the first meeting] in case the board members or the mayor or anyone had any questions,” says Finch.

After the public meetings, the town’s officials voted to approve the water rate increase. With the new rates, the Village of Magdalena is now projected to generate approximately $33,000 per year to use for capital improvements to its water system and balance its operating budget.

“Shadi is just an amazing man. He did so much for us and we’re really appreciative of that… and the help is free.”