How Important was Water Pricing in Achieving Conservation Goals During the California Drought? 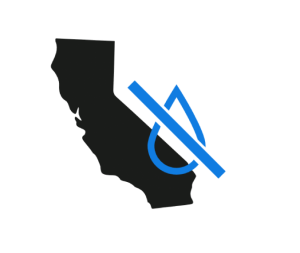 California’s severe drought and statewide conservation mandate provided an opportunity to analyze the effects of pricing strategies as a tool to curb water use. In 2015, the State Water Resources Control Board was charged with implementing a reduction of 25 percent on the state’s local water supply agencies. One of the strategies the Board suggested to local agencies was to look at ways rate structures could provide a financial incentive, also known as a price signal, to customers to conserve water.

Did water agencies with higher price signals achieve greater water savings than others? In some cases, yes. But not always.

A team from the Environmental Finance Center at the University of North Carolina at Chapel Hill analyzed data on hundreds of California water agencies’ water pricing, residential water use, and production data from the mandatory conservation period from June 2015 to May 2016, resulting in three key takeaways for one major conclusion: no single pricing strategy works for every agency in reducing water use.

No Single Pricing Strategy Outperformed Others in Achieving Conservation

Pricing varies across California water agencies, providing unique combinations of pricing signals to customers. In some cases, the rate structure design and the rates at one agency might offer different price signals altogether. For example, one-fourth of the surveyed agencies would have saved their residential customer more than $23 on their monthly water bill in 2015 if they reduced their water use from 12 ccf (hundred cubic feet) in one month to 6 ccf. Yet a different quarter of the surveyed agencies sent much lower price signals for conservation, saving their customers less than $9. Nearly half of the agencies that charged the lower prices actually had increasing block rate structures or budget-based rate structures, both types described as examples of conservation rate structures by the Board. Even though a rate structure might be designed in one way to encourage conservation, it may still provide a weaker incentive to conserve than another rate structure priced differently.

The strength of pricing signals is influenced by more than just whether a rate structure is classified as a uniform structure, increasing block rates, or budget-based rates. Water agencies should be wary of narrowly defining conservation rates based on only one aspect of the rate structure design—the EFC analysis showed there was no statistically significant difference in the water savings achieved between different water rate structures.

High production savings during the conservation period were achieved with all forms of rate structures, as illustrated in Figure 1 below. No specific rate structure type was the dominant predictor of water savings. 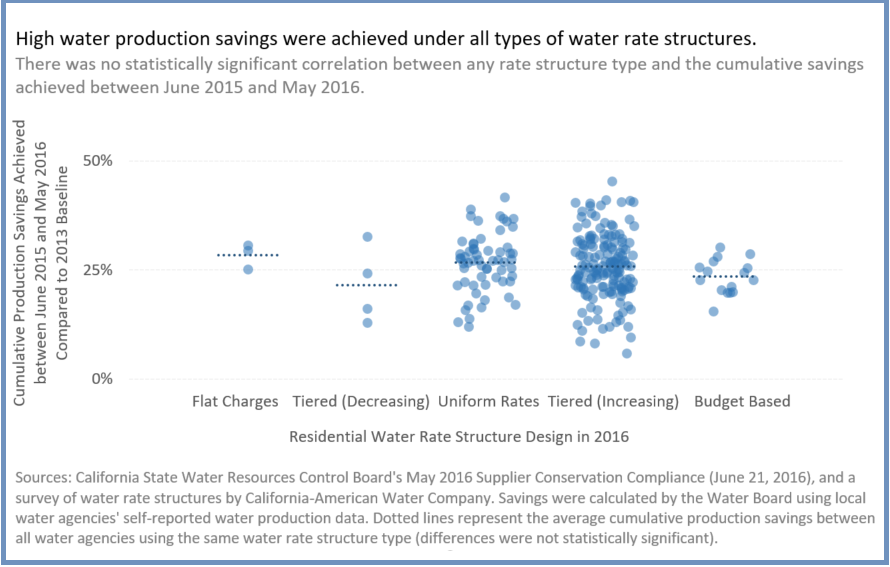 Raising rates will not always result in achieving greater reductions in water use. Many water agencies raised rates at various levels in 2016, but EFC analysis did not find a correlation between the amount of a rate increase and how much water savings was achieved during the mandatory conservation period. In some cases, both agencies raised their rates and those that did not achieve the same levels of water savings. In fact, there was also no significant correlation between high prices and achieved water savings.

One reason this might be the case is that agencies that had higher pricing signals already had lower water use before the conservation period began. Because of demand hardening, they were not able to achieve greater levels of conservation than agencies that had lower pricing signals and higher average use at the start. The EFC found that water agencies starting the conservation period with a higher level of average residential water use were able to achieve greater cumulative savings than water agencies with more efficient customers from the start.

There are Additional Tools for Conservation

Pricing does not appear to be the dominant tool that was used to generate short-term curtailments, according to the study. Yet high levels of conservation were achieved by many agencies during the 12-month period. The EFC analyzed the relationships between non-price conservation strategies and higher levels of short-term conservation.

One of the most successful strategies appeared to be strict local enforcement of conservation directives by issuing warnings to customers that violated them. Agencies that issued more warnings per 1,000 customers achieved, on average, a greater level of water savings than other agencies.

In an age of constant news streams, media coverage of the drought also played an important role during the conservation period. Water conservation advertising by Governor Brown and media coverage of the issue contributed heavily to the water agencies’ savings. A 2017 Stanford study by Quesnel and Ajami, which developed an algorithm to quantify drought coverage by state and national news outlets, linked real water consumption data in California with the public attention garnered by the drought and subsequent conservation period. The study demonstrated that single-family residential customers reduced water consumption at the fastest rate following the intense drought-related news media coverage.

The EFC analysis suggests a one-size-fits-all approach to pricing and conservation strategies across the state would not be successful for the diversity of local conditions and costs that water agencies incur. What is effective for one water agency may not be as effective for another water agency with different customer characteristics.

Some water agencies have high water rates and do not need complex rate structures to convey conservation price signals, while others might rely more on the rate structure design than high rates. Water agencies with inexpensive treatment and delivery costs, or those that have avoided rate increases to keep water rates low, will provide little incentive for customers to save water unless the rate structure has a design that signals an incentive to maintain low water use. These agencies likely will have to work harder with non-pricing conservation strategies to encourage water savings.

The EFC analysis found that there are alternative methods of sending pricing messages other than changing the underlying rate structure. For example, Figure 2 displays rate structures of eight California water agencies. Even though all eight agencies used uniform rate structures, the prices charged to customers provided very different financial incentives to reduce water use, demonstrating the diversity of price signals that can be achieved from a single rate structure design. 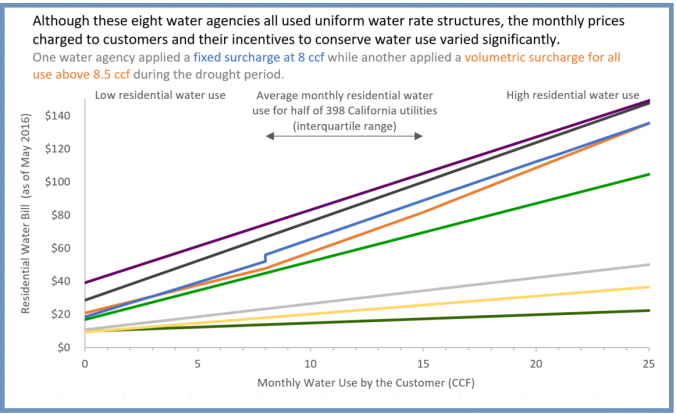 Two water agencies in Figure 2 implemented temporary drought surcharges during the mandatory conservation period. Even without employing block pricing, these agencies were able to send very different price signals to their customers than the other agencies.

The agency with the orange line implemented a volumetric surcharge on water use above 8.5 ccf/month, thereby essentially creating a temporary increasing block rate structure. The other agency (blue line) implemented a drought surcharge of $0.50/ccf for all water use. However, customers under 200 gallons per day (gpd) were given a full refund on that surcharge on the same bill. This means that the next gallon used above 200 gpd was the most expensive gallon purchased, at a total of $4.00 (see price jump at the 8 ccf mark). The drought surcharge and credit were distinct line items on the water bill, communicating to the customer a clear message of incentivizing conservation below 200 gpd. These two different approaches to implementing temporary drought surcharges created different price signals for the customers.

This research revealed that for water agencies in California, while pricing can impact water usage, pricing played a relatively minor role in helping most agencies meet their aggressive curtailment targets during the last drought.