Visualizing the Value (of a State Revolving Loan Fund)

Imagine a town called “Smallville.” Smallville, as you might guess, is small. The town’s water utility needs a new water tank, and they need it now. Like most systems across the US, Smallville’s system is aging and has significant infrastructure needs. Smallville generally knows the assets that are most critical and has assigned a level of risk to each. The numbers say that Smallville needed to replace the tank a few years ago, and failure is imminent. The tank will cost Smallville $400,000.

So, what does Smallville do? The utility does not have a lot of cash on hand and has historically relied on grants to supplement the funding package for infrastructure replacement. The customers are just like those across the county–sensitive to rate increases. Unfortunately, Smallville has felt the reduction in available grant funding and worries that even if the utility does get a grant for the tank that the asset could fail during the “waiting” period between applying for funds and receiving them.

As the federal government has reduced the amount of grant funds available, it has worked to fill the gap with low-interest loans. The graph below shows how those changes have trended over time, highlighting how the funds used to be grants but are now loans. The loans, seeded by US EPA and a state match, provide low-interest (typically half the market rate) loans for water and wastewater projects. These are known as State Revolving Funds (SRF). 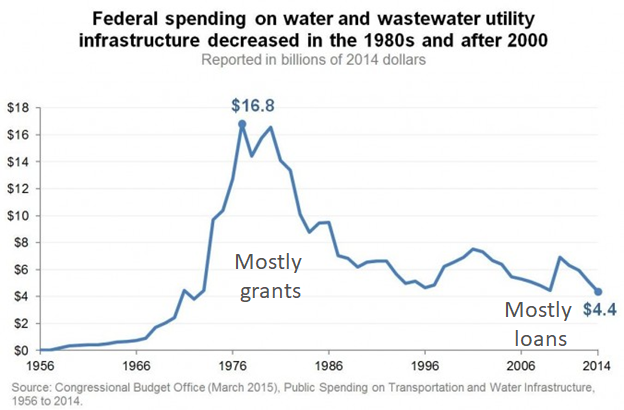 So back to Smallville. The utility decides that it can’t wait for a grant to fall out of the sky and instead decides it needs to use debt. The utility looks into two options: 1. A commercial loan, and 2. An SRF loan. The folks in Smallville wonder if they’re really getting a good deal on the SRF loan, or if they should just opt for the commercial loan with the local bank.

It is hard to know how much money they’re saving side-by-side, so the folks in Smallville decide to use a free tool from the EFC at UNC-Chapel Hill: the subsidized loan calculator.  The tool allows the utility to compare a 20 year loan for a $400,000 water tower through the SRF program at 2% interest to a commercial loan at the market rate (in this case, 4%). The tool offers 3 different ways to look at savings; the interest savings in nominal dollars, the total cost of each option in nominal dollars, and the total cost of each option in real dollars. Screenshots from the tool can be seen below. 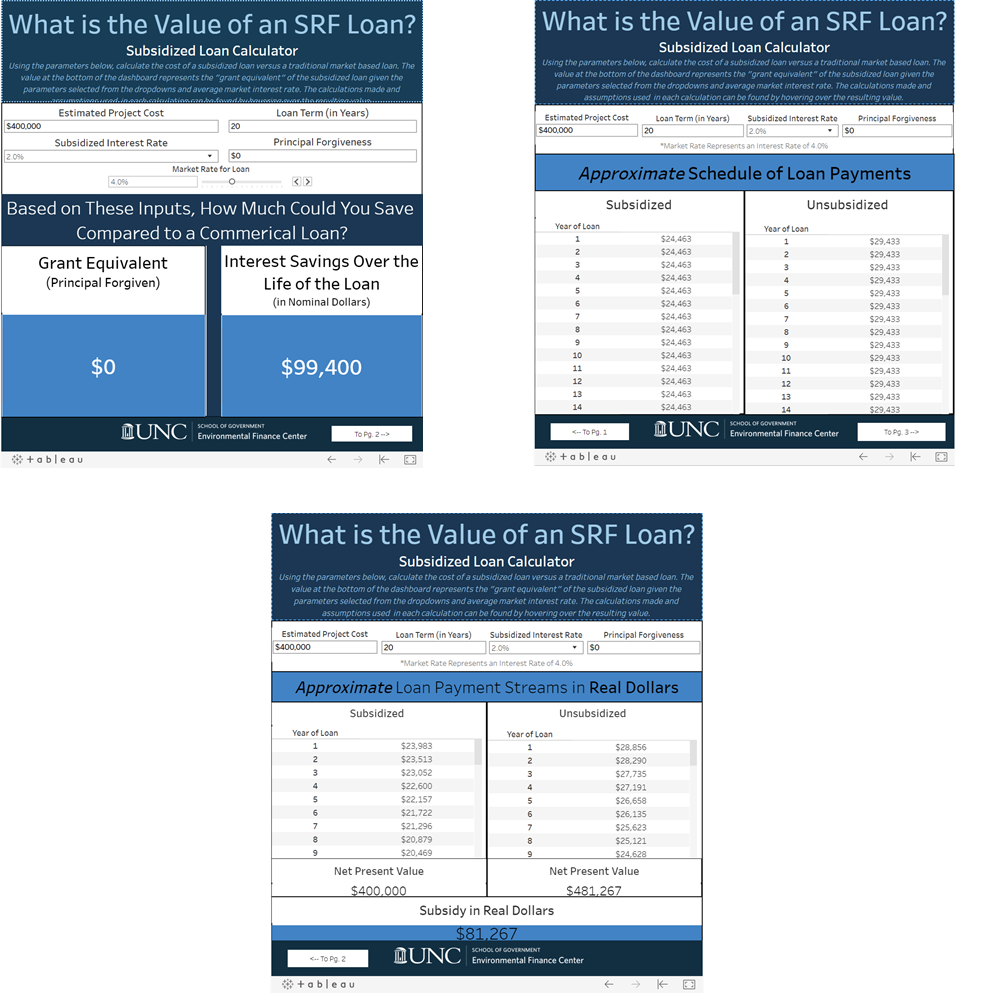 The folks in Smallville find that over the life of the loan, they’ll save $99,400 dollars (in nominal dollars) relative to the commercial loan. Assuming a discount rate of 2%, the utility would save $81,267 in real dollars over the 20 year loan.

There are a million different scenarios Smallville could model, and the tool remains the same and easy to use. Using it, systems can get an idea of the savings associated with using SRF funds. The tool is not designed to perfectly mirror the loan costs for either example, as it excludes fees and any administrative costs, but it provides a baseline for understanding the value of a low-interest loan in the long-term.

The EFC put together a video to demonstrate the tool.